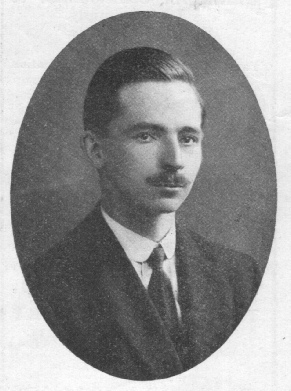 Mr. Gay had seen service in the R.A.M.C. in the First World War. He used his bursary to train for the ministry at Regents Park College and came to Umberslade as his first pastorate, living in the manse with his wife who ably assisted him.

Activities inaugurated by Mr. Gay were Christian Endeavour, two patrols of Boys Brigade and Blue Birds, a class for girls. The Sunday School work was also widened, the teachers' training class taken by Mr. Gay studying not only the Bible teaching for the next Sunday but also Child Psychology. Those meetings, which were held in the manse on Thursday evenings, also included training in how to be secretary, treasurer and chairman.

During his ministry the Mission Room in Chapel Lane was used for Christian Endeavour, Sisterhood and other church meeting.

The Boys Brigade met in the School Room on Tuesday evenings. This building was larger in those days, having an additional room since demolished. After an opening hymn and prayer, one patrol spent time doing gymnasium and the other patrol first aid, changing over at half-time. The standard of both was high and the Brigade was given the redundant equipment from the Institute (now called The Memorial Hall), including horizontal and parallel bars, vaulting horse, mats, clubs and dumb bells.

Mr. Gay took the first aid, using his wartime expertise like any professional. Annual displays in either the School Room or Institute entertained the people of the village. Mr. Gay led the Boys Brigade Bible Class on Sunday afternoons in his vestry.

Despite being hampered by being partly deaf, Mr. Gay was also active in being a superb visitor, regularly taking gifts to the elderly. The church held a monthly collection at Communion to enable him to purchase these gifts.

During the latter part of Mr. Gay’s ministry problems occurred in connection with the property which were to affect all aspects of church work. The Mission Hall was in need of major renovation, particularly the floor. The Congregational Union, who still owned the building and to whom rent was paid, offered to sell it to Umberslade Church. An initial offer was made but did not materialise, resulting in the new hal1 being built next to the manse. Much of the work was done by voluntary labour from people both inside and outside of the church.

At the same time repairs were required to the church schoolroom and manse which started to put a strain on the finances. A loan had to be taken out to complete work on the new hall and for a time the church needed help from the Sustentation Fund (now known as Home Mission) to enable it to continue employing a minister.

Mr. Gay eventually moved to Holwell, in Devon, in 1935, and the debts were finally cleared during the ministry of his successor, Rev. Lees.